We’re honored and excited to be a featured ensemble in this year’s “Collage Concert” at the Kennesaw State University School of Music.  We’ll be joined by Mike DeSousa (trombone) and Robert Boone (drums).  Read more about the event below and check out the promo video as well– see you there! On Saturday, February 8, the School of Music proudly presents the…

Join us on Tuesday, February 4th at 5:00 PM for an exciting mini-recital at the Kennesaw State University School of Music Recital Hall (Music Building Room 109).  This is a rescheduled performance for the GMEA Opening of Exhibits, which was canceled last week due to inclement weather.  The quintet is thrilled to play in this intimate space for your afternoon…

Looking Back: Masterclass with Robert Spano

One of our trumpet players, John Thomas, wrote a blog entry about our masterclass with Maetro Robert Spano.  Check it out below: Over the last several weeks, I have been incredibly blessed to experience masterclasses and performances by two of the greatest minds of our time: Robert Spano and Jeremy Denk.  During Denk’s lecture at the Bailey Center, he mentioned the importance of… 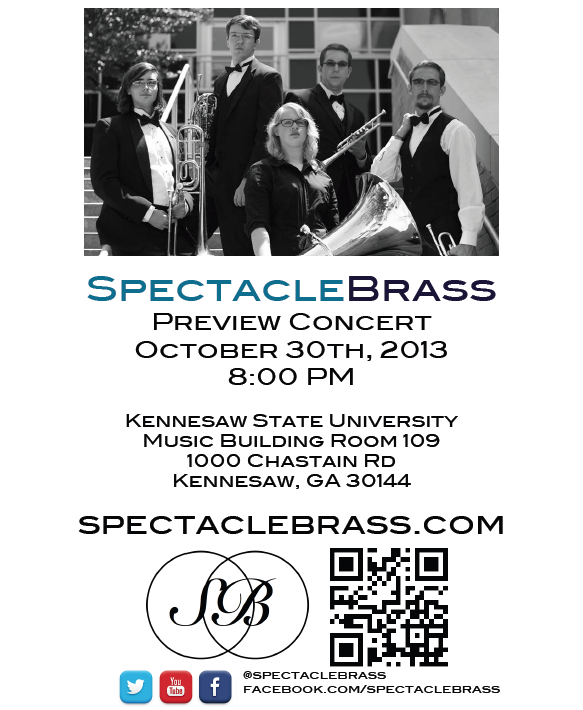 A lifelong resident of Las Vegas, Chris received his formal education from the University of Nevada, Las Vegas. Chris is a former member and soloist with the Las Vegas Philharmonic and served as a hornist for the Nevada Chamber Orchestra, Las Vegas Jazz Connection, and the TAD Wind Symphony of Japan. As a top call freelancer Chris has backed countless headliners on the Las Vegas strip.  Most notably – Frank Sinatra Jr., Tony Bennett, Placido Domingo, Luciano Pavarotti, Mannheim Steamroller, Yes, Josh Groban, Michael Bublé, Johnny Mathis, David Foster (“Hit Man” live album and DVD) and has toured with Andrea Bocelli. Prior to joining Boston Brass, Chris spent 6 years on the road with Dallas Brass. When not touring with Boston Brass, Chris can be heard in Andrew Lloyd Webber’s “Phantom – The Las Vegas Spectacular”.

Trombonist Lance LaDuke of the Boston Brass shares his advice for growing musicians and professionals in this brief interview with Spectacle Brass.

LANCE LADUKE is internationally known as a soloist, writer, adjudicator and clinician. In addition to his duties on trombone and euphonium in Boston Brass, Lance teaches at Duquesne and Carnegie Mellon Universities. Prior to joining, he served as principal solo euphonium with the River City Brass Band, the nations’ only full time professional brass band. Lance has written for countless organizations, including sketches for radio, stage and themed attractions. He also regularly steps in front of audiences around the country in a number of character and comic roles.

A graduate of Michigan State University, Lance received a bachelor’s degree in Music Education, with a cognate in English. After graduate study at the University of Akron (euphonium performance) and George Mason University (instrumental conducting), Lance joined the United States Air Force Band in Washington D.C. While there, he performed for two presidents, countless dignitaries and heads of state and in hundreds of protocol functions, ceremonies, and public relations tours. He maintained a Top Secret security clearance, played for well over a million people from the White House to Red Square, and can be seen (with a magnifying glass) in the movie A Clear and Present Danger.

Lance has also performed with many of the top professional brass groups in the country, including the Brass Band of Battle Creek and the Nothing But Valves brass quartet. He has appeared on over thirty recordings, has produced nine others and has toured extensively throughout the United States and Europe. His performances have been seen and heard on numerous television and radio programs and Lance has appeared onstage with such artists as Henry Mancini, Doc Severinsen, Morton Gould, E.G. Marshall, Morgan Freeman, and Frederick Fennell.

Spectacle Brass interviews Andrew Hitz, tubist with the legendary Boston Brass.  Mr. Hitz offers an encouraging word about the music business; recently he has discussed his ideas about developing successful business models and social media plans at the Savvy Musician In Action Retreat.

Andrew Hitz is an internationally renowned soloist and clinician having appeared in over 40 states and 30 countries including China, Brazil, Russia and Singapore. He recently ended an almost 14 year tenure as the tuba player for Boston Brass.

As an Educational Ambassador for Jupiter Band Instruments, Andrew appears on their behalf all over the world as both a teacher and performer. Over the past 15 years, he has presented at over 20 state music educator conferences. Andrew currently teaches tuba and euphonium at George Mason University and Gettysburg College and is a former faculty member at the American Band College, Virginia Commonwealth University and The Banff Center. He was also a thought leader specializing in social media and arts marketing at the Savvy Musician in ACTION Retreat at the University of South Carolina.

Andrew is the author of “A Band Director’s Guide To Everything Tuba: A Collection of Interviews with the Experts” and is in the process of putting out volumes for the trombone and oboe. In early 2014, he and former Boston Brass colleague Lance LaDuke will launch a digital media company, Pedal Note Media, focusing on providing resources for music educators. They also recently completed the first recording session for the Brass Recording Project featuring four former members of Boston Brass, due out in June 2014.

Andrew lives in the Washington, DC area with his wife Tiffany. They are expecting their first child in April.

Spectacle Brass was honored to participate in the 2013 Boston Brass Music Camp on the campus of Western State Colorado University in Gunnison, Colorado.  So many insights were gained from the Boston Brass, a group that has truly made a long-lasting career performing as a brass quintet around the world for the past 26 years.  Each member of the Boston Brass was very generous to share advice about becoming professional musicians in today’s world.  To begin, let’s check out Jeff Conner.

Jeff Conner is the only original member of Boston Brass. He founded the group with some fellow Boston musicians while a student at Boston University and has engineered the meteoric rise of this ensemble’s fame in the world of popular chamber music. Jeff received his master’s degree in Music from Boston University and his bachelor’s degree in music from Boston Conservatory. He has presented his Entreprenurial Clinics at Yale School of Music, New England Conservatory of Music, University of South Carolina, University of Las Vegas, Kansas State University and the Indiana Music Educators Conference.